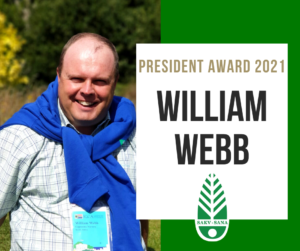 One of the privileges of being the SANA President is to award the Presidents Trophy. This Trophy carries no criteria, it is awarded purely at the discretion of the President.

In the absence of criteria and with a sea of worthy awardees who give selflessly of their time in support of our industry, this is also one of the hardest tasks a President has to perform.

I don’t know if this year’s recipient ever played rugby, a game fully reliant on teamwork, but this recipient is the absolute embodiment of the maxim; ‘picking up the ball and running with it’.

When we selected him for EXCO duty it was a safe bet, he had run with Operations before and he knew the Knoppieslaagte site like the back of his hand. Then we had no sooner taken office and we told him to sell it, and in the interim he calmly dealt with untold burglaries and incidents effortlessly. A Monday morning phone-call from him was inevitably yet another incident, he called it ‘night-time shopping, but he never once presented a problem without a potential solution.

He didn’t do it all alone, he was ably supported by Gerdie Olivier, but the expertise, speed and efficiency with which he put the ball behind the line in handling the sale and importantly the handover of the Knoppieslaagte property was just amazing.

It was one headache less for me to worry about and it’s a pleasure to have him on the team. It gives me great pleasure to award the Presidents Trophy for 2021 to William Webb!