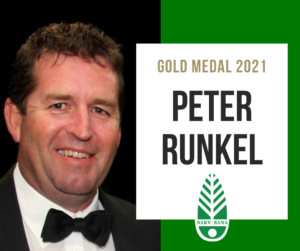 There is no doubt that the pandemic of 2020 has changed our industry. The hard lockdown that left us grappling to save our businesses as it was announced and the weeks that followed are a watershed that as an industry we will never forget.

Navigating us across unchartered waters for Members and non-members alike, the SANA President Peter Runkel, not only had to save his own business but held the torch and was the guiding light for an industry.

There was confusion and disorder as our entire industry sector choked in a commercial stranglehold. He was the voice of reason as well as the reality check for all of us. One can only imagine the constant barrage of queries coming through which he dealt with as well as being a supportive ear to those of us trying to find our way.

Through all of this numerous discussions with politicians and various government committees were constant. Activating a network of influencers and contacts that worked with the President, negotiations and sheer determination by this group using our connections to agriculture as a baseline Peter put together a plan.

The big question was “when do we open again?”. With threats of police closing stores and some retailers starting to put pressure on others to follow their lead, the majority waited for the go ahead from the President. The decision will have taken sheer courage as it was based only on a simple WhatsApp message and a loosely worded email from the DDG.  Peter and Gerdie communicated the command for GCA to reopen on Monday morning 4 May 2020.

In the weeks that followed stores reopened.  Growers and Allied trade had their trucks moving and all with SANA documentation and paperwork to thwart anyone that tried to stop us.

The year that followed turned out to be a year of success for all sectors of SANA. With sales records that will be an anomaly for many years to come.

Not only SANA but the entire green industry owes a huge debt of gratitude to Peter Runkel. This SANA Gold Award is in recognition of his support, leadership and contribution in securing our businesses in a time unprecedented history.