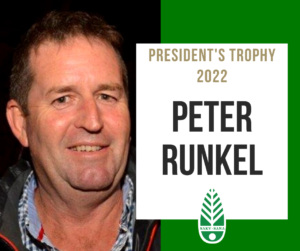 One of the privileges of being the SANA President is to award the Presidents Trophy. This Trophy carries no criteria, it is awarded purely at the discretion of the President.

This person has proven himself to be an absolute legend. The word ‘support’ is entwined into his anatomy. There was never a moment’s hesitation when asked for advice or assistance.

I cannot count the sheer number of times I asked him to review documents, proposals or reports, and every single time he did it within the shortest time and always returned a considered opinion, a caution, a comment, or detailed report-back where required.

He is one in a million. He spent an incredible 10 years within the association, initially masterminding the finances, and budgeting numerous Conventions into surplus, followed by an excellent two years at the wheel as President, and he followed that up by not one, but in effect two years of incredible back-up support.

This level of behind the scenes support simply cannot go unnoticed. He is a rock star with a heart of gold.