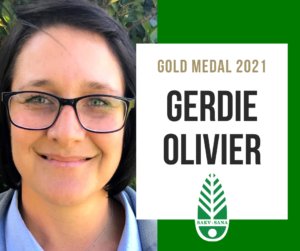 When we head into uncharted territory as what the SANA President did with the hard lockdown, communication is key to any level of success. The words of commitment over and beyond expectation are often used to describe our SANA Operations Manager.

Gerdie Olivier has supported no less than nine Presidents through their terms as well as being a stable force in the SANA offices for nearly two decades. When the industry looks for guidance, they need the President but when they rely on SANA for support, they more often than not look towards Gerdie for help.

As we headed into lockdown it was Gerdie that had to keep the ship stable so that the President could lead. As simple as that sounds it is not. With the operations moved to homes from Knoppieslaagte, Gerdie had no time to think about what was next. It was straight into saving the industry supporting an EXCO, Standing Committee as well as Members. All hours of the day and night, the communications moved via WhatsApp, emails, Zoom meetings, teleconferences the list goes on. Gerdie steered the industry through regular feedback from our President but also participated in negotiations with her invaluable knowledge of our Members’ needs.

In tandem with the President Peter Runkel Gerdie went beyond the call of duty to help secure the future of our industry through this time. For this we all equally owe her a huge debt of gratitude. Role models come in many forms but if you’re a SANA Member then Gerdie Olivier embodies that.

An award for Members, this SANA Gold Award acknowledges the contribution made by Gerdie for her support as well as her personal contribution in securing our businesses during the continuing lockdown.

What this award will do after nearly twenty years as an employee, Gerdie, you will now become an Honorary Member for life. Gerdie, the Members as well as the alumni Past Presidents tip their hat to you – well earned!