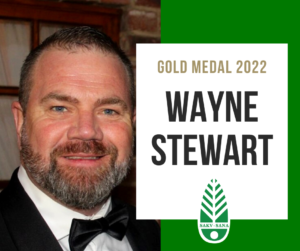 When Wayne gets involved, or suggests or proposes a project, you can be sure that he has already thought it through to conclusion, and he will probably do it all his own way unless a genuinely better solution presents itself. He is a doer, he gets things done, with aplomb. A truly worthy recipient of this prestigious award.

This recipient has been a loyal, committed and dedicated member of SANA. He has worked on almost every committee and been the recipient of SANA Merit, Service and President’s awards.

A man with an incredible vision, a brilliant and leading retailer, a huge believer in “giving back”

A man generous with his time, a passionate teacher and a person that is constantly raising the bar, always researching and learning. A man with incredibly high standards who pushes himself and all those around him to do their absolute best. He is generous, kind, compassionate and fiercely loyal. This man has a photographic memory as well as a memory like an elephant…..cross him at your peril!

A passionate horticulturalist who started his career with Keith Kirsten, went on to start his own landscaping business and joined Eckards in 1993 where he became a partner and then the sole owner in 2017. He has built this business to one of the top Garden Centres in the country.

A Past President who still devotes a lot of time to SANA and is a trustee on the SANA Bursary Fund.

A true leader of our industry.

“I have always believed that if you educate and train your customers, they will all become better gardeners”, has been the lifelong view of Wayne.

Patient by nature, instinctively creative and an accomplished teacher are skills that have combined to take this year’s gold medal recipient to the forefront of marketing in the green industries.

A combination of freezing cold winters in big sky country, a superb education at Grey’s College and a creative instinct for gardening provided the backdrop to a glorious childhood in Bloemfontein for our recipient.

In a region, where most high school graduates chose to study agriculture, Wayne became the first horticultural student from Bloemfontein to enroll at Pretoria Technikon in a generation.

In 1994, he moved across Bedfordview’s Harper Street Bridge to join Dawn Collard at Eckards Garden Centre. A year later, Eckards became a Garden Pavilion. Over the next few decades, he went on to chair – not only the Garden Pavilion marketing team – but also spearheaded the progressive, Life is a Garden marketing campaign to gardeners across South Africa.

Along the way, Wayne served as a long-term trustee of the Tom Arnold SANA Bursary Fund. And, in 2012, he was elected as the 26th President of the South African Nursery Association.

Having become a shareholder in Eckards Garden Pavilion in 2008, he eventually bought and took over full management of this multiple-award winning garden centre.